Considering that Title Source is the largest independent provider of title insurance, property valuations and settlement services in the nation, it may come as a surprise to hear the company’s CEO, Jeff Eisenshtadt, state that title insurance is not the business they’re in.

“That might be the industry we’re in,” Eisenshtadt said. “But that’s not the business we’re in. We’re in the business of data, documents and dollars.”
The statement was made during Eisenshtadt’s opening address to attendees at Data in the D – a Detroit technology conference hosted by Title Source on September 18th. The event attracted over 130 registrants to the One Woodward Building in downtown Detroit, Michigan, where it was held. The guests were primarily college students, professors and IT professionals from a wide range of universities and businesses, all sharing a common interest in technology. 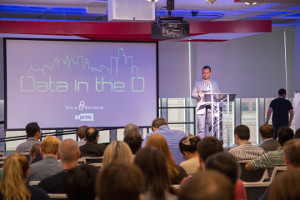 The conference’s central theme was big data – a term used in the IT world to describe the increasingly large and complex data sets that are being gathered and analyzed. Speakers delivered presentations on the importance of data analytics, growing trends associated with big data and predictions of what’s to come for the future.
Present among the event’s guests were numerous team members from within the Quicken Loans Family of Companies, including Title Source. Bryan Wang, leader of the Title Source Data Science team, spoke on the subject of his team’s work with data analytics and their role within the business. 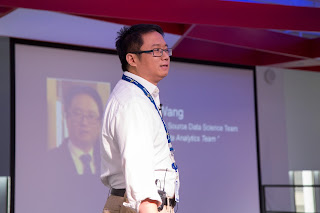 “The conference was a great learning opportunity for our team members,” said Wang. “It fostered new ideas from highly trained experts, and inspired us to think differently and solve business problems in new ways.”
A large turnout, coupled with the positive feedback gathered from attendees after the conference, have opened the possibility for Title Source to turn Data in the D into an annual event.
“I look forward to the growing relationship between Title Source and academics,” said Wang. “Our connections to the academic community will provide the Data Science team with opportunities to continue leveraging the power of the latest big data analytics and improving business performance”